The delegation of the Foundation on an Austrian study-trip

The delegation of the Foundation for the Development of Democratic Local Public Administration, consisting of local government experts, mayors, notaries participated at a three-day study-trip to Austria to study the Austrian communal and local government system. In what follows, we give a summary of what was said during the meetings.

On 14 May, 2018. dr. Walter Leiss, the Secretary-General of the Austrian Association of Municipalities held the first presentation of the study-trip on the Austrian communal system.

Because of the fragmented nature of municipal structure in the last few years there has been some merging of local governments. This has been a very difficult process, which often met opposition. The Austrian Association of Municipalities support voluntary merging, and criticized the other forms of merging. The merging of local governments is a European trend, the reason behind it, is efficiency and economic benefits. However, in practice it does not always prove useful.

The raising of children, the harmonization ofwork-life balance, the issue of nurseries and the provision of kindergarten places from the age of 2,5 until 6 are of primary importance and are issues that should be dealt with most urgently. The university education of kindergarten teachers is an important problem, it puts a huge burden on local governments and according to local governments should not be necessary.

Yet another topic for the countryside is mobility: small shops are closed and bigger commercial units are open in the centres where people go shopping. Little intervention is undertaken to control these processes. When it comes to travelling, there is not enough incentives for people to use the public transport. The same situation is true for medical services: in the near future 30-40 % of doctors in the countryside will retire and the young will not go to work in the country side. As they do not need to be available night and day in the hospitals, young people prefer working in hospitals instead of general doctors’ practices.

Nursing and care tasks are also important for them. These institutions were made the least expensive as in reality they are the most expensive to maintain. 20 % of the elderly are in home care, the rest is in institutions. Local governments negotiate with the federal state on how they may divide the costs on the maintenance of care institutions. Between 2018-2050, the number of people over 80 will triple, it will reach 3 million in Austria.

The mayor explains that a lots of different projects are undertaken in Purbach, a municipality with a population of 2850 people, for example right now a digitalization project is undertaken, they are building a caster-system, they map every pit and examine the state of the draining system. They work in inter-municipal co-operations together with the neighbouring villages: Schützen am Gebirge, Jois and Donnerskirchen, with their participation they apply for calls related to road-maintenance and construction projects. Since 2018, there is civil status records cooperation with the participation of 21 communities of the region. 5 municipalities participate in a regional co-operation on tourism around the Lake Neusiedl, or Fertő. They sell the free-time activities and accommodation together. One of the goals of Donnerskirchen is to have the Western coast of Lake Fertő be registered as nature reserve. Donnerskirchen cooperates intensively with the neighbouring village in the maintenance of the nursery and also participate in maintaining and operating the kindergarten.

The biggest social project is the communal bus. It is provided for the elderly, who cannot drive cars. It functions as a taxi, it takes the elderly where they would like to go. The prices are determined in preferential ranges: 75 € is a half-year seasonal ticket and a yearly ticket is 150 €.

There is free wifi in the local government office and in the community beach. They are implementing an Interreg project with a Slovak local government and a neighbouring municipality, its goal is to provide high-level services around the Fertő Lake. 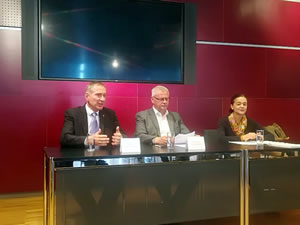 Eisenstadt became a free royal town in 1648, they bought this rank with money and wine. This was a very important step in the town’s life as it gave certain privileges to the town. This preceded the fact that Eisenstadt has become an independent town with provincial rank by today. Based on the provisions of the Austrian Constitution you need to have a population of 20000 people to have this rank. There are only 15 such towns in Austria. Some of them are towns with provincial rank for historical reasons, Kismarton and Ruszt for example that have populations lower than this number.

The establishments have to be continuously renovated, they have very advantageous prices for that. The inhabitants pay for the services and for this reason investments have to be increased.

The independent provincial rank means that they have to undertake more tasks than the others. They function as administrational authority, with different legal possibilities: corporate tax, social jurisdiction, protection of nature. There is a lot of legal regulations that are undertaken by the provincial level. They have had this status since 1921, when Burgeland was attached to Austria. The Burgeland Act of 1920 would have made Sopron a provincial town, but this turned out differently, they had been searching until 1925 and they decided on Eisenstadt.  With this a very positive development began: plants and merchants came. In a short period of time, the size of the population doubled, today this is a small, economically strong town of 15000 people.

There are 17000 workplaces in town which is a good foundation for its economic strength. In comparison with the national data, they are at third place when it comes to purchasing power, average income and qualifications. 25 % of those living at the municipality have a higher degree education. Vienna, Bratislava and Sopron are close, for this reason the town is constantly growing. Sopron is their twin-town.

Childcare and school have had important roles for the last few years. They have every important childcare institutions, they care for 8000 children on a daily basis. Due to this and thanks to the many workplaces 35000 people stay in this town on a daily basis, which is a huge challenge.

They provide whole-day services for children, which also results in the fact that most people work in this field, 1/3rd of the people work in childcare. It is the town’s responsibility to maintain buildings and provide the personnel. Public transport is an important issue in town. 1,5 years ago they created their own bus-system, which is used by approximately 1000 people on a daily basis. There is a city taxi and you may move around in town for 2,5 €.

There are lots of possibilities to spend free time. Approximately 10 million € is used for this goal. They will soon finish an athletic centre, the whole investment cost up to 3-4million €. 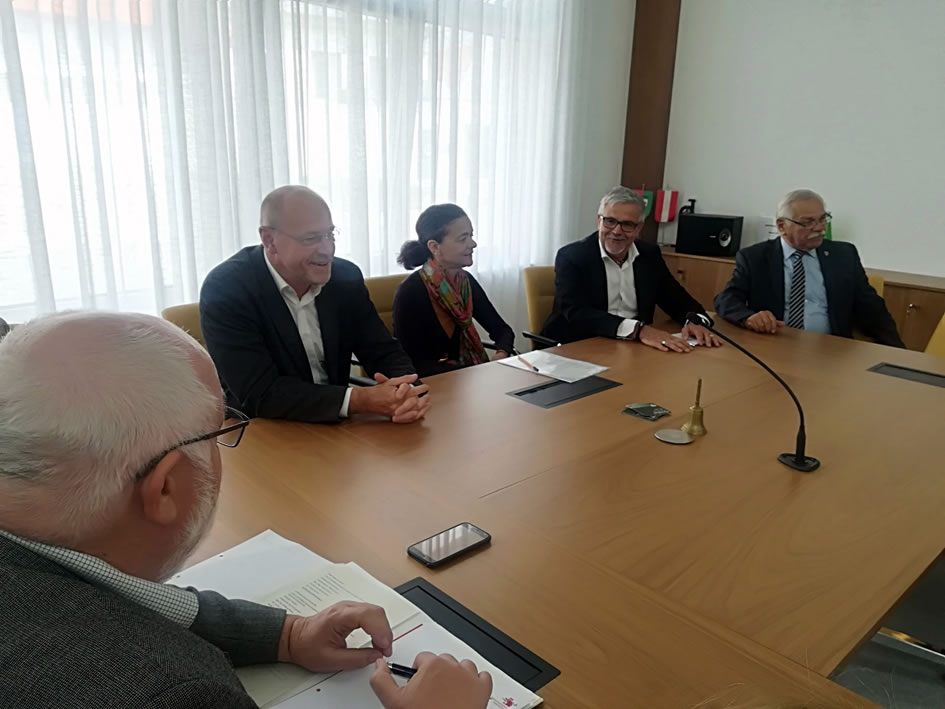 The delegation was welcomed by Wolfgang Kovács, the mayor of Pandorf, the deputy-mayor and the notary

In Pandorf, 50 different nationalities live in this village. Pandorf has a population of 5000 people with 4000 workplaces, however this is not typical. This is a very young municipality, with lots of children. This municipality is made special by the big industrial area, which has been created for 25 years. This was partially planned but also due to luck. After the deconstruction of the iron curtain, it was expected that Vienna, Bratislava, Budapest will act as good centres for the development of industrial and commercial infrastructure. The province succeeded with the instalment of public utilities, the plants settled down here and a commercial unit well-known for Hungarians settled here.

The municipality has been expanded quickly. Kindergartens are small, the third kindergarten opened three years ago, 5 groups were planned, 4 are already full, in 2- 3 year- time a fourth kindergarten has to be built and the schools have to be extended also. Roads, channels, public lightening were also expanded. The new local government office was opened a year ago. They have around 100 employees in the municipality, most of them work in the local government institutions, and many of them work in municipal-management.

Pandorf is not rich. They do not have reserves, they only undertake investments from their income. Those moving to Pandorf and building a house, want all the infrastructure immediately. They have to draw a line at 6-7000 inhabitants, they do not want a larger municipality.